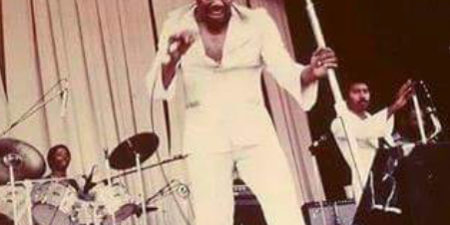 On the night of January12, 2018 the Heavens opened and Danny Woods entered, with his trademark smile and a peace that most can only wish to experience. Danny began his amazing journey in Atlanta, GA on March 27, 1942, the son of Daniel Woods, Sr. and Julia Dukes Woods. During his formative years, he strengthened his amazing voice and set the foundation for his faith while singing in the church choir. Along the way, he caught the eye of Gladys Knight and developed a friendship that resulted in taking his first step onto a stage and performing during one of her shows.

Possessing a strong desire to share his talents with the world, Danny left Atlanta and headed to Detroit. In Detroit, Danny befriended David Ruffin, later of the Temptations, Clyde Wilson, and Melvin Davis. With the talent this quartet possessed, forming a group was the only logical course.  They toured throughout Michigan, earning accolades from all who saw them. It was during this time that Danny also performed with Rare Earth and Aretha Franklin.  Danny and David took the next step and moved to New York to find fame. There Danny met his hero, the great Jackie Wilson. While in New York, Danny’s talent wasn’t lost on the greats of the time. Danny performed many times at the Apollo Theater with the likes of The O’Jays, The Spinners, The Stylistics, Manhattans, Wilson Picket, Jackie Wilson, and numerous other entertainers.

As word of his talent spread, his exposure increased and the number of fans skyrocketed. In 1967, when Holland/Dozier/Holland left Motown and established Invictus/Hot Wax record labels, they needed a flagship act with talent to spare and charisma like no other. That’s when they turned to Danny, General Norman Johnson, and Harrison Kennedy to be their premier talent as Chairmen of The Board. During this time, the Chairmen of the Board not only hit the airwaves but the charts as well.  With such hits as “Pay to the Piper” and “Give Me Just a Little More Time,” the Chairmen of the Board were featured on Don Cornelius’ “Soul Train.”  Riding on the tide of stardom, the members of Chairmen of the Board went on to do solo work with great success.  It was during this time that Danny appeared on Dick Clark’s “American Bandstand” and “The Johnny Carson Show.”

In the late 1970’s General Norman Johnson and Danny Woods made the decision to bring their dynamic energy and untouchable talent back to the Chairmen of the Board, and the legions of fans, awards, hits, and successes were boundless.  As one of the top entertainers in the Beach Music genre he helped to create, Danny Woods has been inducted into the North Carolina and the South Carolina Music Halls of Fame, both as a member of Chairmen of the Board and as a solo artist.  He received awards, accolades and recognition that went far beyond the dreams of the young boy in Atlanta, singing in the church choir.

Astoundingly, through all of the successes Danny enjoyed, he remained as he was in his youth.  Above all in his life was his devotion to his Heavenly Father and his faith.  He praised his Father for all that he had received in his life and recognized that his talent was a gift from God, a gift he loved to share with others.  When not performing or visiting with others, Danny could be found wetting a hook, either on a river bank or on a pier; it never mattered to him as long as he was fishing. He never outgrew his roots.   Offstage, he enjoyed the farm life, meeting people, making them smile, and leaving them with the love he had for all, spreading his love of Christ. His stage presence was larger than life, his energy infectious, and his personality endearing.  Many called him friend and reached to share a bit of his light.

When Danny went to his Heavenly home, he left behind his devoted wife, Elaine Woods, and his cherished children Cheryl Woods-Weaver, Bryan Mason, Kimberly Pleasant, Micah Woods, Shena Kiper, and Corey Gates. He is also survived by a sister, Patricia Dixon, a brother, Harvey Woods, ten grandchildren, a son in-law and a daughter-in-law and a precious little girl he held close to his heart, Julia. He was preceded in death by both of his parents, his sons Danny and Aaron, and two loving and supportive wives, Alma and Sharon. Danny also left behind many fans and friends, as well as memories, music, and magic that only Danny could produce and that will live on in his many recordings and the hearts of all who knew him.