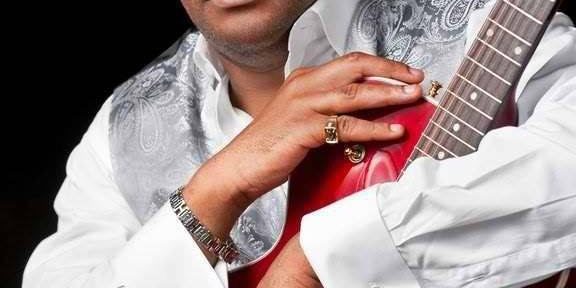 Everyone loves Missy Elliott’s “Sock It To Me!”  We also loved it when Lauryn Hill was singing “Walk right out to the sun hand in hand” on Nas’ If I Ruled The World!  What if I told you that I  spoke with the man who was a member of Legendary Classical R&B groups The Moments, The Manhattans, The Delfonics and currently The Stylistics?  These groups are sampled by our favorite artist’s.

Eban with his guitar collection

Harold Eban Brown is Decorated with awards from 98.7 Kiss FM Hall of Fame, and NAACP Award for his accomplishments as lead vocalist of The Delfonics. This accomplished  multi-talented artist, is a world-renowned guitarist, composer and singer who has  a huge celebrity fan base.  During this Interview Eban was on vacation in Florida relaxing in between tours.

Natalie: Hi Eban, it is so good to speak with you again!  Thank you for taking the time out of you vacation to conduct a Q and A with me.  When did The Moments realize that their new guitarist was a singer?

Eban: Well, a drummer named Bubbles Jerry Kinchen Jr’.,  introduced me to Billy Brown, my father and Bubble’s father sang together in the 1960s.  Billy Brown was from Ray Goodman and  Brown (The Moments) and when Billy Brown heard me sing, “All I Have” he was floored!  I was 18 yrs old, “All I Have” was one of my favorite songs!  That’s how I became a singer.

Natalie: Wow! How did you learn how to hit those notes if you were focused on playing the guitar?

Eban: My family had a quartet so I easily picked it up.  I never wanted to sing!  I concentrated on my craft and then I looked at George Benson as an example, George Benson sings and plays the guitar.

Natalie: How would you describe your vocal range?

Eban: First tenor, I sing all of the notes in a harmonious structure.  I hear those notes and I stack my vocals one by one Sam Cooke started it then Marvin Gaye revolutionized it!

Natalie: Sexy Mama by The Moments is on heavy rotation on my iTunes!  Music Mogul Sylvia Robinson was a genius.

Eban: I have to humbly thank you!

Natalie: What was it like being a lead singer with not one but two legendary groups?

Eban: It’s a blessing, I do this everyday we don’t take into stock how we help people in their own lives, we think about the gig and getting to our next stop! Thank you for telling me this you are keeping me encouraged and I honor you for that!

Natalie: Wow, you have me stumped! Thank you!

Eban: I was in school idolizing the Moments when the teacher asked everyone what career path they wanted to take.  Some students wanted to be Fireman, Dr’s. etc, I said that I wanted to be the lead singer of The Moments. I dressed like The Moments, and I lived in that mode!  You have to believe what you pray for!

Natalie: I don’t share most of my work because people don’t appreciate it,  they have stolen ideas and don’t support it! I share my work with a select group!

Evan: I am doing this to leave something behind and build my legacy!  In order to do that you, need top media attention!  Be unique as possible and humbly claim it! You should watch the movie The Founders where they talk about McDonalds.

Eban: It’s messed up, but it’s business the brothers did not take it to the next level. You need to stop hiding your work!

Natalie: When you were with The Moments did you ever sing the “Girls” or “Look at Me” song in French?

Eban: No, I never had to sing it in French! We performed the songs in English when I re recorded it, they were supposed to bring in a French translator so I hope to do it one day for the best of The Moments with Billy Brown and myself. Billy is singing the first five songs and I sing on the last five songs!

Eban Brown and Nasir Jones at the Venetian Hotel

Natalie: You have a long list of Celebrity fans.  What memory sticks out the most when you met Nas?

Eban: Nas is one of my all time favorites, the way that we met was when Kelis flew us in for his surprise Birthday Party at the Venetian in Vegas I had to restrict myself so no one could see me.  Chris Webber and I were there and Nas said that he was working on a new album and that he wanted me to record a song with him. The party was on Saturday and I was in the studio on Tuesday in NYC recording “You Can’t Stop Us Now.

Eban: Yes, I would like to work with him again for my own project.  I am hoping to get a hold of him.

Natalie: When I post this Q and A I will to tag him to everything!  I will also make an Instagram post that says Nas contact Eban we need another collaboration!  By the way my husband and I are going to Nas’ concert here in Boston on 9.12.2017!

Eban: That’s great!  The both of you will have a great time!

Eban: Master Suite was my very first solo album when I built my own record label Stardom Records. It is an acoustic album and I was getting my feet wet as a solo artist. My current album Summer Time In Tokyo has original songs as well as remade classics by Michael Jackson and Paul McCartney.

Natalie: When do you start your promotion tour for Summer Time In Tokyo?

Eban: Once I have songs on the radio, I should be up and running late September, early October. Then I have to get charted (Have songs on the charts) You get charted by getting spins and competing with other artist’s!  Once that’s complete then my media tour will kick in!

Natalie: Do you have any special markets that you would like me to promote this in?

Eban: Everywhere!  To the ends of the earth!  Several great records are not getting played because it was not publicized!  “You cannot sell a secret” Eban Brown’s Grandfather’s quote.

Natalie: I forgot to ask you what  you thought about my website? Especially my Q and A’s?

Eban: I wished that I could write the way you wrote!  It takes a certain insight to write that way!

Natalie: I am so honored that you enjoyed it! Thank you!

Natalie: What is your favorite Stylistics song?

Eban: That’s an unfair question!  We have great music but if I had to pick it would be “ People Make The World Go Round.”  It was recorded in 1971 but the same social issues are still prevalent today!   Everyone is trying to make a dollar, Spike Lee even used it in one of his movies that’s how young folks caught onto it.

Natalie: When will you perform your solo and group act in Boston?

Eban: I am hoping to make the connection with Scullards.  I am self managed and once you get a record you don’t have to call anyone anymore!  You need good people in your corner.  I thank God for that!

Natalie: I cannot wait to post this on my website thank you and enjoy the rest of your vacation.

Eban: Your welcome I fly back to New Jersey in the morning and then I am off to Chicago and the United Kingdom.

1991 The Moments Classic Soul
1993 Delfonics
1993 The Manhattans Classic Soul
2000 Lead vocalists of The Stylistics Classic
2002 “Master Suite”, a Jazz/Pop masterpiece with an amazing acoustic guitar feel. 1st solo album
2004 Restless Soul Jazz and Pop II solo album
2006 Exit 15  Third solo album
2008 Can’t Stop Us Now single with Nas
2009 Determinism an Instrumental album
*Albums
Will Hart and The Delfonics live in Chattanooga
Rob Base, on the Album “Break of Dawn”, which featured the Delfonics, the two songs were “Are You With Me”, and “Chillin”

Natalie’s favorite songs by various by The Manhattans, The Delfonics, The Moments and Stylistics are:

La- La Means I Love You

I Don’t Want to Make You Wait

You Make Me Feel Brand New

Your a Big Girl Now

I’m Stone In Love With You

Eban’s star power can be witnessed on stage with the following dates listed below.

For solo act tour dates  and to purchase his music visit https://www.ebanbrownmusic.net/shows

Japan Tour dates for The Stylistics are:

Please visit The Stylistics http://www.thestylistics.org/tour-schedule for a complete list of their tour date!